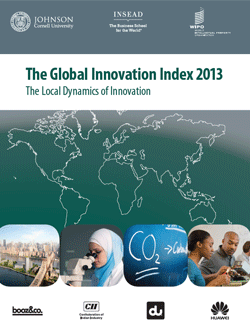 The United States rejoined the five most-innovative nations and the United Kingdom moved up to the third spot while Switzerland retained its place atop the rankings in the Global Innovation Index 2013, published by Cornell University, INSEAD, and the World Intellectual Property Organization (WIPO).

Despite the economic crisis, innovation is alive and well. Research and development spending levels are surpassing 2008 levels in most countries and successful local hubs are thriving. A group of dynamic middle- and low-income countries – including China, Costa Rica, India, and Senegal – are outpacing their peers, but haven’t broken into the top of the GII 2013 leader board.

This year’s report casts additional light on the local dynamics of innovation, an area which has remained under-measured globally. It shows the emergence of original innovation eco-systems, and signals a needed shift from a usual tendency to try and duplicate previously successful initiatives.

The GII 2013 looked at 142 economies around the world, using 84 indicators including the quality of top universities, availability of microfinance, venture capital deals – gauging both innovation capabilities and measurable results. Published annually since 2007, the GII has become a chief benchmarking tool for business executives, policy makers and others seeking insight into the state of innovation around the world. This year’s study benefits from the experience of its Knowledge Partners: Booz & Company, the Confederation of Indian Industry, du and Huawei, as well as of an advisory board of 14 international experts. United Nations Secretary-General Ban Ki-moon joined the authors of the report and its Knowledge Partners in presenting the GII 2013 findings at the High-Level Segment of the United Nation’s Economic and Social Council (ECOSOC). The High Level Segment, held July 1-4 in Geneva, brings together heads of state, ministers and heads of international agencies, this year focusing in particular on the role of science, technology and innovation and the potential of culture in achieving the Millennium Development Goals and promoting sustainable development.