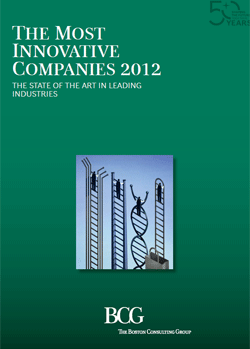 The Most Innovative Companies 2012

Innovation has many faces, from incremental changes in existing products to entirely new offerings for customers. Companies also use knowledge new to the organization to increase efficiency, ensure regulatory compliance, improve sustainability, and boost profits. But whatever form innovation takes, its goal is clear to successful organizations: to create value from ideas, whether those ideas are new to the world or new to a particular company.

In a turbulent economic environment, innovation is an important driver of the organic growth necessary to generate sustained, above-average returns. To explore the state of innovation, The Boston Consulting Group has fielded annual innovation surveys since 2004. These surveys of more than 1,500 senior executives allow comparisons over time as well as across regions and industries. They capture executives’ views of their own innovation plans and also their opinions of other companies’ innovation track records.

Among the many indicators of the current and future robustness of the innovation environment, two of the most critical include the relative priority of innovation and the outlook for increased innovation spending over the coming year. This year’s survey finds these two metrics at their highest levels in more than five years.

Our survey reveals the 50 companies that executives ranked as the most innovative, weighted to incorporate relative three-year shareholder returns, revenue growth, and margin growth. The list has its share of well-known technology innovators that have long dominated the top ten. But what makes this year’s list really stand out is the rise of companies in traditional sectors such as the automotive industry and industrial products and processes, along with a shift toward diversified conglomerates that manage a broad portfolio through a centralized point of view on innovation. These companies have honed their capabilities and taken advantage of their brawn and breadth, muscling onto the list as formidable innovators.

This year we explore in detail the major industry and company trends that have emerged over time in our survey. We map the innovation landscape in four major industries that dominated the list in 2012: industrial products and processes, automotive, consumer and retail, and technology and telecommunications. We also highlight the health care industry, which has failed to place more than one pure-play company on the list since 2007. Finally, we examine five practices that generate value for the most innovative companies—and we explore how those practices have played out at innovative companies in a range of industries.