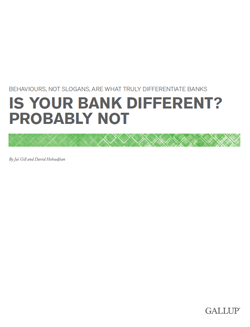 Like most companies, banks and financial institutions invest enormous amounts of time and money crafting what they think is a unique identity. That identity is meant to appeal in an emotionally engaging manner, build deeper customer relationships, and positively affect market share and profitability. It’s a good idea — so good that every bank does it.

It pays, literally, to give customers a reason to think your bank is the best.

In mature markets such as banking, where products are commodities, creating brands that offer better value than their competitors do is a real challenge. But it’s the key to acquiring and retaining customers in competitive markets. And banks cannot accomplish real differentiation until customers believe that a bank is truly different — specifically, if they can agree that „Bank X is the best.“

Bank customers rarely say so, however. In a recent banking study Gallup conducted in New Zealand, only 7% of customers believed that one bank was the best in the whole industry, while 44% of customers said that all banks and financial institutions are about the same. This is not unique to New Zealand; Gallup has found similar responses from banking customers in other parts of the world.

That 7% is a particularly valuable customer segment. Gallup has discovered that customers in New Zealand who agreed that one bank is the best are twice as likely to be fully engaged with their bank as those who believe that all banks and financial institutions are the same. Similarly, those customers are nearly two times as likely to be extremely satisfied with the bank’s products and services and to be extremely likely to recommend the bank to their friends and family, compared with those who perceive no differentiation.

So it pays, literally, to give customers a reason to think your bank is the best. And while we are not suggesting that the marketing and communication initiatives by New Zealand banks are ineffective, these banks clearly are not realizing the full potential of their marketing investments. To put a fine point on it, they’re missing one critical aspect of developing a banking brand: behavior.