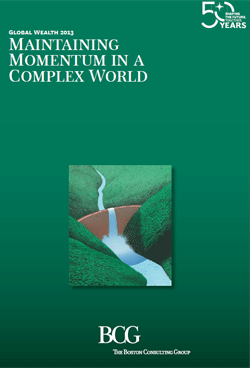 In its thirteenth annual study of the global wealth-management industry, BCG addresses the current size of the market, the performance levels of leading institutions, and the state of offshore banking. It also provides a thorough analysis of the key trends shaping the business landscape and offers clear action steps that players should take in their quests to overcome difficult industry dynamics and build on the 2012 rebound.

Wealth increased measurably in the old-world regions of North America (7.8 percent), Western Europe (5.2 percent), and Japan (2.4 percent), mainly owing to the sharp rebound in equity markets in most countries, particularly in the second half of the year. Meanwhile, new wealth creation fueled stronger, double-digit growth in the new-world regions of Asia-Pacific ex Japan (13.8 percent), Eastern Europe (13.2 percent), and Latin America (10.5 percent). Wealth in the Middle East and Africa (MEA) saw near-double-digit growth (9.1 percent). New-world regions will account for nearly 70 percent of the growth in global private wealth over the next five years.

The highest density of millionaires was in Qatar, where 143 out of every 1,000 households have private wealth of at least $1 million, followed by Switzerland (116), Kuwait (115), Hong Kong (94), and Singapore (82). The U.S. had the largest number of billionaires in 2012, but the highest density of billionaire households was in Hong Kong (15.1 per million), followed by Switzerland (9.4 per million).

Offshore wealth, defined as assets booked in a country where the investor has no legal residence or tax domicile, rose by 6.1 percent in 2012 to $8.5 trillion. Despite this increase, stronger growth in onshore wealth led to a slight decline—to 6.3 percent from 6.4 percent, compared with 2011—in offshore wealth’s share of global private wealth. While offshore wealth is projected to rise modestly over the next five years, reaching $11.2 trillion by the end of 2017, wealth is increasingly moving onshore due to the intense pressure that tax authorities are exerting on offshore centers.

Benchmarking. BCG benchmarked the performance of more than 130 institutions—either pure private banks or wealth management units of large universal-banking groups—from Western Europe, Eastern Europe, Asia-Pacific, North America, Latin America, and the Middle East. Globally, in 2012, wealth managers achieved 13 percent growth in assets under management (AuM) over the previous year. Wealth managers in the Asia-Pacific region accounted for the strongest growth (23 percent), followed by those in Latin America (18 percent). EU onshore and offshore institutions, as well as North American banks, achieved AuM growth of around 10 percent. The growth was driven largely by the rebound in many equity markets during the second half of the year, but also by the generation of net new assets.

The report identifies numerous market-landscape trends, client trends, and business-economics trends that will shape the wealth management industry for the rest of the decade. These trends include the following:

The report also identifies critical steps that wealth managers must take if they hope to achieve or maintain a leadership position throughout the rest of the decade. These steps include the following: