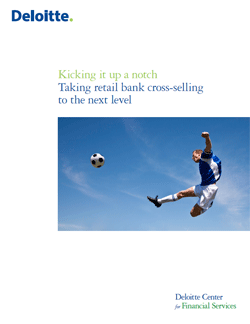 Cross-selling has become a strategic priority for many banks in recent years. It is well known that the incremental cost of selling to current customers is generally much lower than to new customers. Recognizing this, banks have, over the years, invested heavily in cross-selling to increase wallet share.

Yet, it appears, many banks may be far from realizing the full potential of cross-selling. A Deloitte survey conducted in August 2012 supports the view that existing cross-selling programs may be ineffective: only 19 percent of retail bank customers owned three or more products in addition to a checking account with their primary bank, compared to 49 percent who have three or more products with other financial institution.

Successful efforts to address deficiencies in cross-selling may depend on a more refined understanding of the following questions:

This paper aims to provide some perspective on these questions. It also emphasizes the importance of adopting a behavioral segmentation approach that takes into account attitudes and perceptions together with demographics to improve cross-selling.

Die Studie „Kicking it up a notch – Taking retail bank cross-selling to the next level“ kann hier direkt heruntergeladen werden.