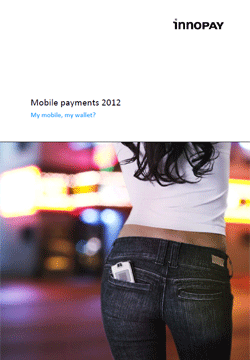 With an increasing number of smartphones having enhanced capabilities, with many new players entering the market and consumers being more and more socially connected through their mobile phones, we are definitely seeing a change in the marketplace. The report argues that more compelling propositions are needed to achieve mass adoption of mobile payments by both consumers and merchants. In particular the benefits for merchants aren’t always articulated strongly enough, whereas applications beyond payments, such as loyalty schemes, will be the real drivers for merchants.

In general, the report places large importance on the user contexts of mobile payments, for both the consumer and merchant, and thus distinguishes between developing and developed markets. For developed markets with an existing  financial infrastructure in place, mobile payments  must offer added value over existing payment methods to achieve critical mass: they must be easier, cheaper, safer and above all, offering compelling and distinctive services. For developing markets mobile payments have strong potential in providing financial access to the unbanked. As most mobile devices in these regions only have basic functionality, the financial services offered should be kept simple.