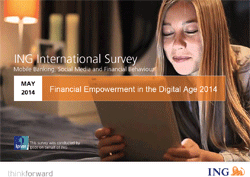 For the second consecutive year, the ING International Survey is exploring how people in Europe are using mobile banking and new ways to pay. In what is thought to be one of the biggest and most comprehensive surveys of its type, the results of the survey reveal interesting insights in the usage of mobile banking and how this is changing financial behavior among consumers.

Financial Empowerment in the Digital Age 2014 from ING Group

Turkey has the largest share of internet users who use mobile banking, making it the top mobile banking “hotspot” again in 2014. Turkey has the eighth highest use in the developed, internetadjusted measure but as internet penetration increases, mobile banking is set to rise. Uptake rose in nine of 13 countries surveyed, although increases and decreases of 3% or less may be due only to sampling variability and could be considered as representing no change. 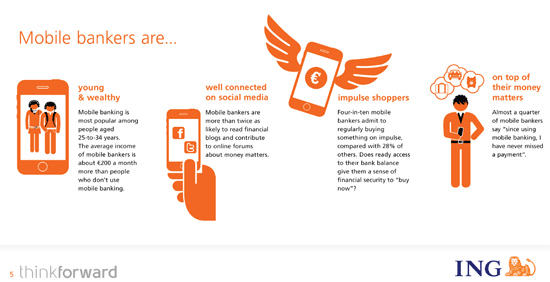 Mobile bankers more on top of their financial matters

The almost 5,000 people surveyed who use mobile banking tend to be younger, earn more and be more on top of their financial matters than non-mobile bankers. In fact, 80% indicated mobile banking had improved the way they manage their money. Our mobile bankers are more likely to read money blogs but also more prone to regularly buy something on impulse.

People who have been using mobile banking for longer are more likely than newer users to say the technology improved the way they manage money. It seems the positive change from mobile banking is better and better the longer it is used.

Fewer people in Europe are expecting banks to use social media this year, compared with the survey last year. Although the social media demand fell, many people in Europe do want personalized alerts and reminders from their bank. Mobile bankers are even more eager to get intelligent tools from their bank to help them make better financial decisions.

Technology changes the ways we shop and pay

New technology is not only playing a role in the ways we bank, it also changes the ways we shop and pay. Cash is being used less often than a year ago by about half of people in Europe but the pace change over the next 12 months may not be rapid as only one-in-five of our “cash devotees” who have not cut use of cash in the last year think they will use cash less in the next year.

Since last year, comfort around contactless payments has risen a lot in Romania and Poland, both early adopters of the technology, with modest rises in France and Italy. However, the opinion in Europe as a whole remains split. Mobile bankers are more likely to be confident using contactless payments.

Digital currencies not seen as the future of spending online

Despite the hype, few people in Europe see digital currencies – such as Bitcoin – as “the future of spending online” with 76% disagreeing with that statement or not having an opinion about it.

Cash less but not cashless

About half of people in Europe say they use cash much less now than they did a year ago. Alternative ways to pay include debit and credit cards, transferring funds directly, sending money by text message, contactless payments and more.