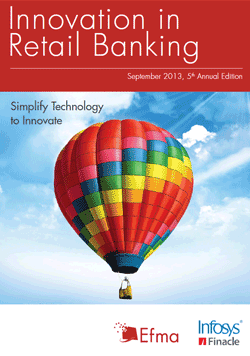 This year’s study, which surveyed 148 banks in 66 countries, revealed that as the global economy recovers, retail banks across the world are increasingly investing in innovation as a means of generating revenue and controlling costs. In fact, 60 percent of banks surveyed have an innovation strategy compared to just 37 percent five years ago, when the report was first issued.

The study also found that to overcome the main barriers to innovation – legacy systems and organizational silos – banks are looking towards technologies that can simplify their operations and deliver a richer customer experience. In particular, mobile innovation is beginning to gather pace, with 77 percent of banks deploying or planning to deploy a mobile wallet solution.

Key findings of the study include: