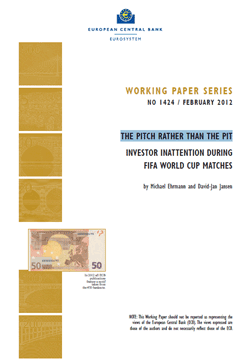 At the 2010 FIFA World Cup in South Africa, many soccer matches were played during stock market trading hours, providing us with a natural experiment to analyze fluctuations in investor attention. Using minute‐by‐minute trading data for fifteen international stock exchanges, we present three key findings. First, when the national team was playing, the number of trades dropped by 45%, while volumes were 55% lower. Second, market activity was influenced by match events. For instance, a goal caused an additional drop in trading activity by 5%. The magnitude of this reduction resembles what is observed during lunchtime, and as such might not be indicative for shifts in attention. However, our third finding is that the comovement between national and global stock market returns decreased by over 20% during World Cup matches, whereas no comparable decoupling can be found during lunchtime. We conclude that stock markets were following developments on the soccer pitch rather than in the trading pit, leading to a changed price formation process.

Das EZB Whitepaper „The pitch rather than the pit“ kann hier heruntergeladen werden.