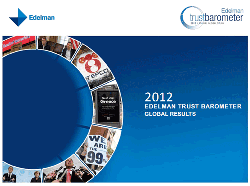 As the financial situations around the globe remain bleak, banks and financial services stay the two least trusted industry sectors for the second year in a row. The financial meltdown throughout the Euro Zone has had a particularly negative impact on trust in countries like Germany, France and Spain. The persisting negative economic climate is going to make the recovery of trust in that region even more difficult in 2012.

On the opposite end of the trust spectrum, technology, for the sixth consecutive year, is the most trusted. The steady introduction of more powerful tablets and smart phones has helped keep the tech sector in good standing in both developed markets such as the U.S. and the UK and in developing ones like China and India.

A severe loss of confidence in the financial services industry also occurred in South Korea where trust fell 25 points. South Korea was the setting for a remarkable slide in trust across every industry sector except automotive and technology. A few of the biggest decreases happened in telecommunications (down 32 points), financial services (25 points), banks (24 points) and media (16 points). Despite the fact that South Korea was less affected by the global economic downturn, there is still a high level of uncertainty its people are facing. This, along with the intensified polarization of wealth, diminishing disposable income and a hike in consumer prices, could be driving this drastic drop in trust.

In Germany, the energy sector felt the effect of Japan’s nuclear disaster, recording a 24-point drop in trust, equal only in size to the hit the auto industry took in that country.  Energy also saw a steep decline in France and South Korea.