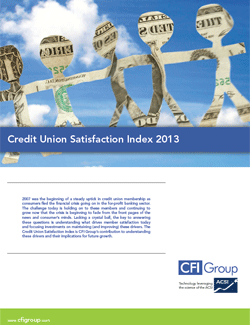 2007 was the beginning of a steady uptick in credit union membership as consumers fled the financial crisis going on in the for-profit banking sector. The challenge today is holding on to these members and continuing to grow now that the crisis is beginning to fade from the front pages of the news and consumer’s minds. Lacking a crystal ball, the key to answering these questions is understanding what drives member satisfaction today and focusing investments on maintaining (and improving) these drivers. The Credit Union Satisfaction Index is CFI Group’s contribution to understanding these drivers and their implications for future growth.

Of the six drivers of satisfaction measured, the 2013 CUSI found that four play a significant role in driving member satisfaction and, therefore, should be a focus area for the industry. The drivers most likely to impact customer satisfaction are „Online banking,“ „Branch staff,“ „Branch convenience,“ and „Information/communications.“

Since 2007, the credit union industry has seen membership grow by slightly more than five percent and assets under management grow by roughly 33 percent over this same period. This growth has come primarily at the expense of for-profit banks.

The unique cause-and-effect methodology of the ACSI gauges satisfaction relative to specific elements of the customer experience that influence overall satisfaction and future success. The ACSI has proven to be an indicator of economic performance, both for individual firms and for the macro economy. As such, the national ACSI score has been shown to be predictive of both consumer spending and stock market growth, among other leading indicators of economic growth.