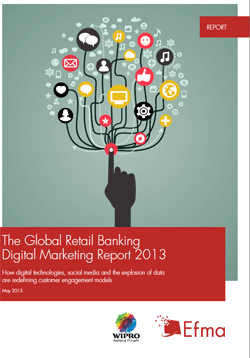 The proliferation of digital channels is changing the way customers consume banking services, with digital soon to emerge as the primary channel of interaction. Given this trend, banks are focusing on digital marketing initiatives to target this growing segment of customers.  Location, context and behavior-specific real time event led marketing, driven by analytics will likely be the norm in the future.

Wipro and Efma have created the first ever digital marketing capability index which helps benchmark the digital marketing capabilities of banks vis-à-vis the best in class. Only 13 per cent of the banks surveyed demonstrate the highest level of maturity in digital marketing. The index measures the maturity of the banks on eight different capabilities; assessments including a bank’s capability on data management, offer delivery, marketing processes and usage of analytics. The index also alludes to the fact that a majority of banks do not practise real-time event driven marketing and the ability to focus on personalization.

The study also revealed that social media was not yet a part of mainstream marketing and is still not considered a key customer interaction channel. In our survey, we discovered that social media efforts were mainly managed by the marketing department followed by the branding and communications team. Also for over 80 per cent of the banks surveyed, their social media spend was less than 500,000 Euros per annum.