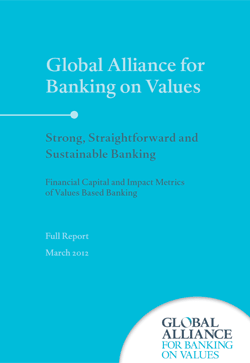 Global Alliance for Banking on Values

A new study shows that sustainable values-based banks, which base their decisions first and foremost on the needs of people and the environment, are outperforming traditional mainstream banks in many areas, including financial indicators such as return on assets, growth in loans and deposits, and capital strength, making a compelling case for values-based banking.

Commissioned by the Global Alliance for Banking on Values (GABV), a network of 15 of the world’s leading sustainable banks, and funded by the Rockefeller Foundation and GABV, the report compared the performance of 17 values-based banks with 29 of the world’s largest and most influential banks between 2007 and 2010 in an effort to show the benefit that sustainable banks can have on underserved people.

These 29 banks are defined as Globally Systemically Important Financial Institutions (GSIFI) by the Financial Stability Board. Often referred to as ‘too big to fail’, they include Bank of America, JP Morgan, Barclays, Citicorp and Deutsche Bank.

The report concluded that values-based banks were twice as likely to invest their assets in loans, lending more than 70% of their assets during this period on average. The values-based banks also appear to be stronger financially with both higher levels of, and better quality, capital. The BIS 1 Ratio, an important measure of a bank’s solvency, averaged over 14% during the period studied, compared with under 10% for the mainstream banks. The sustainable banks also had an average Equity/Asset ratio of over 9% while the GSIFI banks averaged just over 5% during the period covered.

The sustainable banks analyzed in the report also delivered higher financial returns than some of the world’s largest financial institutions. Return on Assets, the measure increasingly considered most relevant for judging a bank’s financial performance, averaged above 0.50% while the big banks earned an average of just 0.33%. Values-based banks also had returns on equity averaging 7.1%, compared to 6.6% for the GSIFI banks.

“Our banking industry has an unprecedented opportunity to change, to help meet some of the greatest social and environmental issues of our time,” says Peter Blom, GABV Chair and CEO of Triodos Bank, Europe’s largest sustainable bank. “This report shows that doing good is beneficial for banks not just in a theoretical and ethical sense, but also financially, when measured against conventional benchmarks such as the financial bottom line.

“The findings are crucial for a global banking industry which has tremendous potential to affect positive change through its ability to lend money to finance entrepreneurs and stimulate local economies. And, most importantly, it shows that a sustainable approach to banking offers all of us the prospect of a stable, prosperous future.”

His sentiments are echoed by the report’s co-funder, The Rockefeller Foundation, who supported the study to help advance an understanding of how values-based banks can be better enabled to provide needed financial services to vulnerable communities in an environmentally sustainably way.

“The new findings demonstrate that a different approach to banking – one in which the focus is on social and environmental benefit for vulnerable people – can bring   comparable financial returns to the traditional banking model,” said Heather Grady, Vice President of Foundation Initiatives at The Rockefeller Foundation. “The Rockefeller Foundation is thrilled to support GABV in their work to encourage mainstream banks to embrace a progressive approach to finance, thereby improving access to needed financial services for poor and vulnerable populations.”

One important measure of the growth of the values-based banking sector over the past four years is in the amount they lend, financing their clients. This increased 80% between 2007 and 2010, while mainstream banks increased their lending by just over 20%. Significantly, this growth highlights the focus of values-based banks on expanding business in the real economy.

While the worldwide economic downturn accounts for a portion of that disparity in lending growth, it also indicates how increasingly, people around the world are turning to banks that put the interests of people and the environment alongside financial returns.

“Clearly, there is growing demand worldwide for values-based banks that have a triple bottom line approach to banking, balancing people, the planet and prosperity,” says Tamara Vrooman, CEO of Vancity. “The appeal of GABV members is that their banks are transparent, they regularly share details of how they invest the money entrusted to them, and, importantly, they are grounded in their communities, lending only to enterprises working in the real economy.

“Our challenge now is to meet this growing need for lending and other bank services among people traditionally unserved or underserved by the big banks.”

To that end, the Global Alliance for Banking on Values intends to create a new financial vehicle in 2012 to raise capital required to do just that. In 2009, when GABV committed to raising $250 million in capital over three years to support expansion of lending to unserved communities and individuals, and green projects, it ended up raising US $400 million in just one year.

Another indication of the growing popularity of sustainable vales-based banking is the growth in the number of banks that are turning to this community-based approach. This week Canada-based Assiniboine Credit Union was accepted as the 15th member of GABV, with more banks expected to join the GABV this summer.