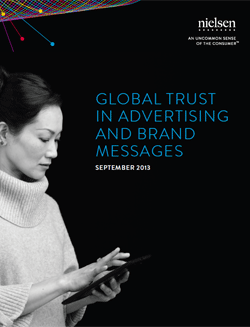 Whether it’s advertising via old standbys like TV, newspapers and radio or newer media like mobile and online, earning consumer trust is the holy grail of a successful campaign, according to Nielsen’s latest Trust In Advertising report. The good news for advertisers is that consumers around the globe are more trusting now than they were several years ago. In fact, the study reveals that trust in online advertising is increasing, as is trust in ads on TV, radio and movie screens.

Word-of-mouth recommendations from friends and family, often referred to as earned advertising, are still the most influential, as 84 percent of global respondents across 58 countries to the Nielsen online survey said this source was the most trustworthy. Trust in advertising on branded websites increased 9 percentage points to 69 percent in 2013 as the second most trusted format in 2013, a jump from fourth-place ranking in 2007. Sixty-eight percent of survey respondents indicated that they trust consumer opinions posted online, which ranked third in 2013, up 7 percentage points from 2007.

“While TV remains the front-running format for the delivery of marketing messages based on ad spend, consumers globally are also looking to online media to get information about brands,” said Randall Beard, global head, Advertiser Solutions at Nielsen. “On the flipside, earned advertising channels have empowered consumers to advocate for their favorite brands, something that shouldn’t go unnoticed by brand advertisers.”