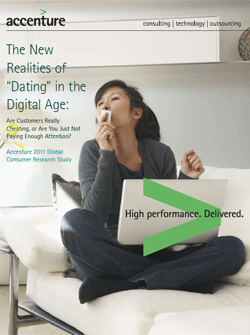 The New Realities of “Dating” in the Digital Age

Two out of three (66 percent) consumers switched companies –  including wireless phone, cable and utilities – as a result of poor customer service in 2011 even as their satisfaction with the services provided by those companies rose, according to new research released today by Accenture (NYSE: ACN). The research findings pose new challenges for marketers as they focus on building customer loyalty and improving market share in a very competitive business environment.

The Accenture Global Consumer Survey asked consumers in 27 countries to evaluate 10 industries on issues ranging from service expectations and purchasing intentions to loyalty, satisfaction and switching.

Among the 10,000 consumers who responded, the proportion of those who switched companies for any reason between 2010 and 2011 rose in eight of the 10 industries included in the survey. Wireless phone, cable and gas/electric utilities providers each experienced the greatest increase in consumer switching – five percentage points. This includes consumers who switched entirely to another provider as well as those who continued to do business with their current provider but added services from another provider – a new, but growing trend.   According to the survey, customer switching also increased by 4 percent in 2011 in the wireline phone and internet service sectors.

The survey also found that fewer than one-quarter (23 percent) of consumers surveyed feel “very loyal” to his or her providers, while 24 percent indicated that they had no loyalty at all. And, only half (49 percent) indicated that they are strongly influenced by at least one loyalty program offered by their service providers.

“Companies are improving many of the most frustrating parts of the customer service experience, but they are facing a customer who is increasingly willing to engage multiple providers for a service and is apt to switch quickly,” said Robert Wollan, global managing director, Accenture Customer Relationship Management. “While high-quality sales and service in areas such as product knowledge and efficient issue resolution remain a basic requirement, in order to achieve sustainable, profitable growth, companies must better understand what really keeps their customers engaged by examining a number of overlooked, but critical points of interaction in the customer relationship.”

The research also suggests five potential blind spots that, when not recognized and addressed, may be hindering companies’ abilities to successfully engage with customers in today’s uncertain economy. Accenture provides actions that companies can take to help address these blind spots, attract and retain customers to contribute to growth and position themselves to achieve high performance.