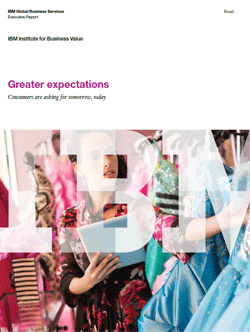 A historic convergence of technology trends is sparking a new retail era: the explosion of mobile technologies, the spread of social networks, a new generation of advanced analytics and the disruptive nature of “the cloud.” The transformation to this new era is well underway, with consumers already using and expecting even more innovation from today’s retailers.

The latest IBM Institute for Business Value Global Consumer Study investigates shoppers’ omnichannel expectations to find out how imminent is the arrival of this new retailing era. We surveyed 30,554 consumers in 16 countries to discover their attitudes about shopping, particularly as it pertains to adopting omnichannel capabilities.

To determine the level of omnichannel adoption, we asked consumers where they made their last purchase. We find that the store still rules but it is losing share precipitously. The percentage of respondents who last shopped in a physical store declined from 85 percent in 2012 to 72 percent in 2013. The real winner was the online channel, which saw its share nearly double to 27 percent of shoppers versus 14 percent last year. 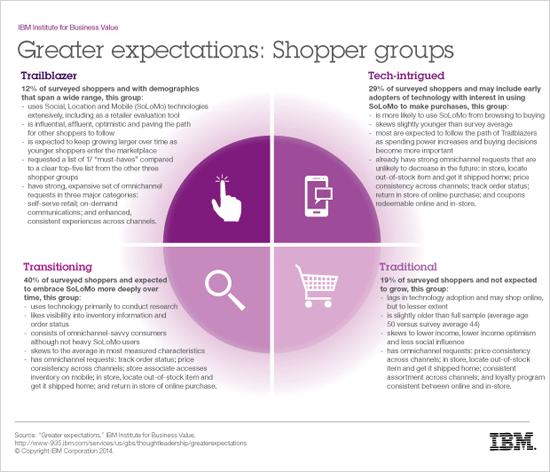 In particular, the Trailblazers stood out based on their high expectations that retailers provide SoLoMo capabilities. Trailblazers are the ones leading the path to an era of “self-serve” retail. Of all four groups, we see Trailblazers as the future of shoppers. Yet, it’s only a matter of time before many in the middle two groups (representing 69 percent of respondents) have the same level of expectations as Trailblazers.

While omnichannel retailing — the practice of providing consumers a connected, personalized experience across online, mobile and in-store channels — is the stated goal of nearly every retailer, consumers aren’t asking for it per se. They simply expect to be able to use their technology in all aspects of their life, including how they shop. IBM’s study found that the five most important omnichannel capabilities to consumers are, in order:

The study found that consumers fall into four distinct groups differentiated by their interest in and use of social, location and mobile technologies while shopping. Nineteen percent of consumers surveyed lag behind the majority of the population when it came to using technology to shop. Another 40 percent of shoppers use social, location and mobile technologies for information gathering, but are not likely to use them to purchase products. Twenty-nine percent use social, location and mobile much more extensively, for everything from researching products to ordering goods.  Twelve percent of consumers surveyed are classified as “Trailblazers,” those who use these technologies across channels and base their choice of retailer on whether they make that possible.

Trailblazers, although a small group today, are particularly interesting as they are paving the path most consumers will walk tomorrow. The IBM study anticipates that most consumers currently using technology to research and shop will only increase their usage. Trailblazers also represent a desirable demographic. They have a higher income level, are more optimistic about the future, plan to spend more in 2014 and are very socially engaged. IBM recommends retailers serve Trailblazers to stay competitive.

Showrooming No Longer a Top Threat

Consumers are increasingly shopping online. In 2013, 84 percent of shoppers surveyed by IBM chose the store to make their last non-grocery purchase. This year, that figure dropped to 72 percent. Surprisingly, “showrooming” — the practice of browsing goods at a store, but ultimately buying them online — is not behind this online growth. While more respondents showroomed this year (eight percent vs. six percent last year), only about 30 percent of all online purchases actually resulted from showrooming — a drop from nearly 50 percent last year. Seventy percent of online purchases were made by shoppers that went directly to the web.

Omnichannel retailing is not just a challenge of data volume — Big Data — but really a challenge of broad data. Omnichannel requires retailers to combine all customer interaction data — be it from the store, online or a mobile device — with external data from social media, video and sensors. The problem for many retailers is not only combining all this information together to form a consolidated view of a customer, but also reacting to it in a timely manner. Consumers are expecting retailers to learn from their interaction so recommendations and offers are personalized. Retailers should look to cloud computing to support their omnichannel strategy as it provides retailers the fastest, most efficient way to bring broad sets of data together in a single, secure platform.