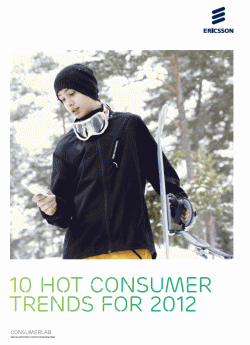 Ericsson ConsumerLab identified the hottest consumer trends for 2012 and beyond. Some of the highlights included that connectivity has become as essential as roads and electricity, that social media are redefining news reporting, and that anyone can now be a service provider.

Once they have been connected, the internet is one of the last things that consumers would be willing to give up if they had to reduce their expenses, according to ConsumerLab’s findings.

For more than 15 years, ConsumerLab has been conducting research into people’s values, behaviors and ways of thinking about ICT products and services. Ericsson’s global research program is based on annual interviews with 100,000 individuals in more than 40 countries and more than 10 megacities.

Michael Björn, Head of Research at ConsumerLab, says: „Consumers have taken to smartphone apps like fish to water. Touch and direct access via icons hide the complexity of internet services, and people are now willing to explore many new areas of everyday life – anything from recipes to receipts – that benefit from connectivity. We just concluded a study in emerging markets, and found that even first-time mobile-phone users very quickly become internet users. Connectivity is becoming an increasing part of their daily activities.“

Here are the 10 hottest consumer trends: