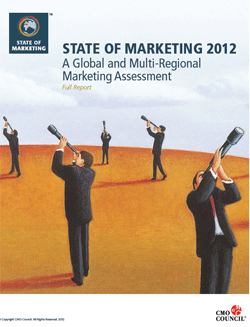 The findings of the 2012 “State of Marketing” report indicate that the role of the CMO now encompasses more critical customer touch-points that directly impact the customer experience, and executives who are up to the challenge are being compensated based on their performance and impact on the business. The outlook is distinctly positive for marketers as executives head into 2013 with renewed confidence in their roles and business performance.

The global benchmark of marketing spend and intentions was drawn from the insights and contributions of more than 550 senior marketing executives representing North America, Europe, Asia-Pacific, the Middle East, Africa and South America. Nearly 65 percent of these marketers report directly to a president, CEO or chief operating officer. More than 30 percent of respondents represent companies with more than $1 billion in annual sales; 11 percent represent companies having between $500 million and $1 billion in sales; and 30 percent are with companies with revenues between $50 million and $500 million.

Through an online audit managed by the CMO Council, data was collected over Q3 and Q4 of 2012, gathering insights about mandates and results from 2011 into 2012, as well as forward-looking intentions for spend and strategy over the next 12 months into 2013.

The full report includes an expanded executive summary, charts, graphs and detailed breakdowns of findings, as well as an infographic series designed to highlight budget advancements and variances over the past several years.